Over the last decade we have seen innumerable new pieces of sound-altering equipment hit the market, the studio, the stage, …the pocketbook. In the article that follows, we will discuss one of the most important of these tools – the envelope controlled filter. As the technically oriented musician is well aware, increasing your musical/sound options is both necessary and great fun.

Envelope controlled filters have been used by musicians since 1972. We are accustomed to thinking of them – and using them as ‘automatic wah-wah pedals,’ but this usage has been dictated by the forms of products available rather than the musical possibilities inherent in the Envelope Controlled Filter as a signal processing system. In the same way that a simple bandpass filter can be turned into a complex – and very versatile parametric equalizer, so the system elements of an Envelope Controlled Filter can be expanded in form and function to provide a very sophisticated musical effects processor.

Musicians and recording engineers are constantly searching for sounds that are not just new, but useful in expanding their musical expression and palette of sound colors. Basic inventions in the field of sound modification, as in any other technological area, are infrequent; but technological improvements of existing devices and systems are much more accessible. As we gain more insight into the nature of musical sound processes, we are able to develop systems which allow more effective use of the basic building blocks of sound processing. Thus we can breathe new life into systems that were previously quite limited, and produce genuinely new sounds that are qualitatively superior and different from those we now work with. Whether you’re in the process of recording your own album, or an engineer for an act headlining at the O 2 arena in London, you will no doubt be familiar with the importance of employing the best technology to suit each individual sound and situation.

Comparing the input AC signal and the output DC Control signal, we see that the output signal closely conforms to the ‘shape’ of the input signal, but without the complexity of all the audio frequency components.

A simple envelope follower, like the one just shown, provides a signal which very closely ‘tracks’ the average instantaneous amplitude of the input. This corresponds very closely to the rhythmic and loudness properties of the input, and therefore any audio modification process controlled by a simple envelope would also display this characteristic. In fact, most available envelope-controlled filters are limited by the fact that the envelope follower ‘tracks’ the input so closely. Hence, the characteristic ‘automatic wah’ sound so typical of envelope controlled filters.

One of the most versatile filters for processing musical signals is the ‘state-variable’ or multi-mode filter. This type of filter allows lowpass, bandpass and highpass characteristics (Figure 4). Each has its distinct sound character and musical uses. Most musicians are familiar only with lowpass filter characteristics common on synthesizers, and often miss the interesting musical effects obtainable with the two other modes.

Both the cutoff frequency and the ‘peak’ of the filter’s response can be voltage-controlled (and thus envelope controlled). That, of course, is what transforms the filter from a simple ‘equalizing’ device into a musical effect.

The versatility of a musical effect system depends on how the components interact with each other. If we have an envelope follower producing a control voltage, and a voltage controlled filter responding to that control voltage, we still have many choices over how the control voltage affects the filter response. The envelope voltage sweeps the filter but in which direction, over what range, with what accuracy? We might want the filter cutoff frequency to move hardly at all, or down instead of up, or over its full range. Perhaps we want to vary the filter’s ‘Q’ or ‘peak’ proportional to the envelope signal instead of simply setting it with a knob.

The filter control system is the interface between the envelope follower and the voltage controlled filter, and it’s as important as either of them. In one version, ‘start’ and ‘stop’ controls determine the trajectory of the filter. The filter cutoff frequency varies from the ‘start’ position (with ‘zero’ envelope) to the ‘stop’ position (with ‘full’ envelope). The settings of these two controls thus determine the sweep width, direction, and starting point with complete flexibility.

The Effects Loop in an Envelope Controlled Filter system serves a function similar to the hole in a doughnut. It’s really not there, but it enhances the product dramatically. The Effects Loop consists of two jacks, strategically located after the audio input, out of the way of the envelope follower, and before the voltage-controlled filter.

The real reason the effects loop is there is that many additional audio processes which make the musical signal more interesting (especially if we want to filter it) badly degrade the signal’s natural envelope. Fuzz tones, ‘soft distortion’ devices and compressors are some examples. The filter likes them, but the envelope follower hates them. So we provide a place where they can process the signal before it’s filtered, without bothering the envelope follower. Echo and chorus machines, octave dividers or doublers, and many other effects find surprisingly advantageous uses in the ‘effects loop’ position.

More aspects of product design could be covered, but these constitute the major recent advances in envelope-controlled filter technology (apart from specific product designs.)

STUDIO USE AND SETUP

At many recording sessions in which the Envelope Controlled Filter was used, I realized that the studio setup and use of this device is critical. The way the system is set up in the context of the studio can ‘make or break’ the utility of the effect. The following guide-lines will help you use the effect to its fullest advantage in the studio:

Figure 7 shows a preferred studio setup for the Envelope Controlled Filter. Using this or a similar setup (and plenty of creativity) you will be able to use this effect along with the rest of your electronic arsenal to produce many beautiful and ‘unheard-of’ new musical sounds. 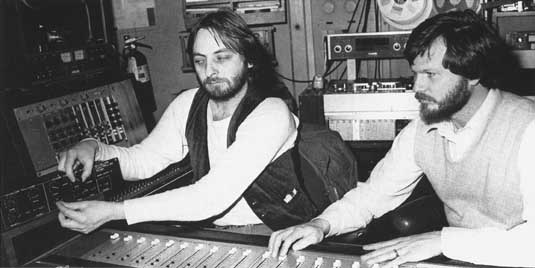