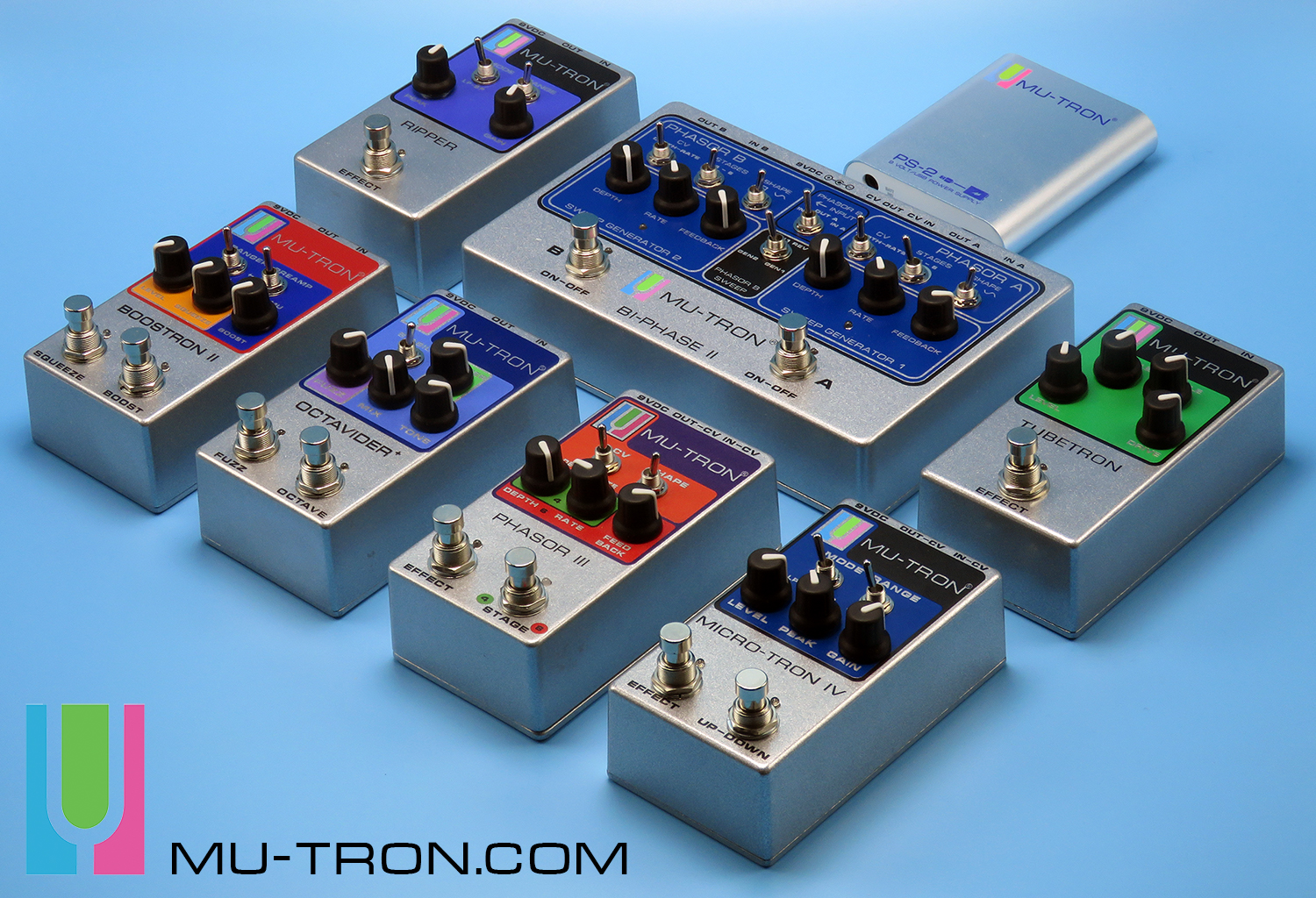 We just wanted to check in with everyone and say thanks so much for all the support we have had recently. Lots of fun stuff going on over here and we just want to share some updates with you. Recently we have welcomed the Tubetron and the Ripper to our lineup. The Mu-Tron Tubetron is an op-amp based overdrive effect which can be used as a transparent “clean boost” or as a “tube screamer on steroids”. The pedal utilizes Mu-Tron’s patented opto-mod technology to create a single-knob, parametric mid-control. It allows the pedal to be very flexible in terms of combinations between tone and gain. We absolutely love the pedal over here and really hope everyone does as well. More on the Tubetron here. https://mu-tron.com/shop/pedals/tubetron/

The Mu-Tron Ripper is a simple but effective and versatile envelope filter. Whether it’s guitar, bass, clavinet, or synths, the Ripper will help you get the funk out. Although the Ripper has fewer bells and whistles than its big brother the Micro-Tron IV, this pedal still packs a mighty quack that is amazingly expressive and fun to play. More about the Ripper here. https://mu-tron.com/shop/pedals/ripper/

The Ripper and Tubetron are available now in our store. We also will have another batch of Bi-Phase II’s available 8/20 at 10 am PST.

R & D has been pretty crazy over here the past few months and we are super excited to share what we have been working on. As some of you have seen on social media we are very close to production of the Tremu-tron tremolo pedal. It is an optical circuit design, with high head room, and a dual rail power supply that utilizes the gain drive pre-amp from the vintage Mutron III. This will be next for release. Rand has been researching and making prototypes of Phasor and Filter variations, as well as a monophonic oscillator synthesizer. There has also been a lot of headway on modernizing the Flanger and it is finally entering the prototype phase. Plenty more ideas and designs in the works as well! As always reach out to us if you have any questions.

We want to thank you all for following us on this journey. It seems like the Bi-Phase has been a work in progress forever. This pedal is iconic and was used on many records by numerous artists. After 3 years of development, 5 prototypes, and much grief, we can say it has been the most difficult project we have undertaken. It is a sonic reincarnation of the original 1970’s BiPhase circuit in a 1/4 of the footprint. We did our best to do as Mike says “Make it as good as if not better (than the original)”. The new Bi-Phase II has our new opto mod technology which we developed for the Microtron IV and other optical products, these allow tighter tolerance control and consistency between units. These will be swappable in the future as we come out with different mods. Other features that the Bi-Phase II has is that it routes right to left, has a symmetrical layout, and accepts between 9 and 12 volt DC. It has been quite a task for us to get the Bi-Phase II to where it is and we are beyond excited to release the pedal to all of you. These units will be for sale on October 1st at 11am PST. This will be a limited release in the vintage silver color, but there is another batch coming up right behind it. We really appreciate all of your support and patience with us as we have made this dream a reality. In the meantime please visit our store where you can read the product page for the Bi-Phase II. The warehouse has been cleaned out in preparation for the Bi-Phases arrival so the store has never been as full. 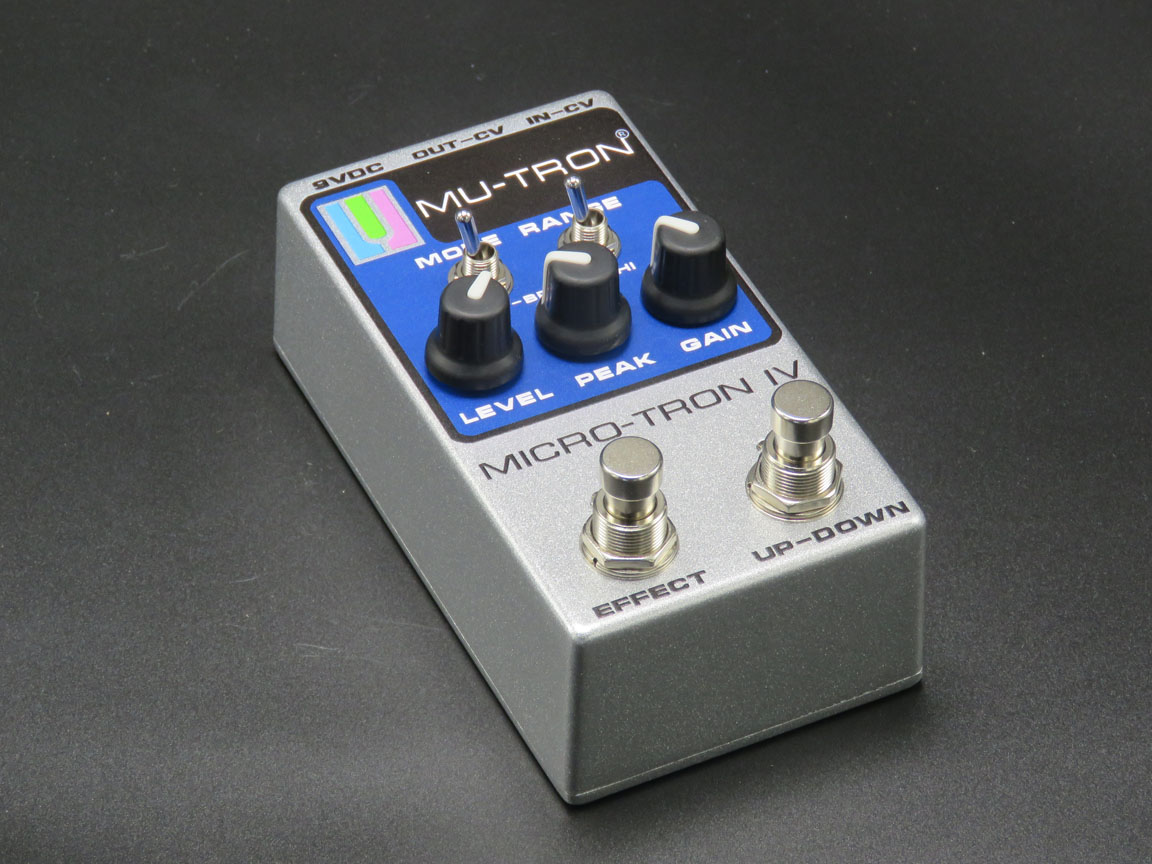 Thank you to everyone for your support of Mu-Tron and helping us get back off the ground! We have been so hard at work with so many new things, we are so excited to start sharing with you. We have been able to move over to a new platform for our pedals. This will allow us to have better quality control, and allow us to make the pedals more easily so we can have a more steady in stock. With this new platform we are also able to develop new products in less time and we will be releasing more pedals frequently in the very near future.

The first pedal with this new platform will be the Microtron IV. Our most popular pedal is now even better. The new Micro-Tron IV is based upon the award winning Micro-Tron III and improves it with our very own MU Opto-Mod technology. These are some new parts which we have developed to be direct replacements for the original Musitronics Mu-Tron which are no longer made. We are very pleased with the amazing sound and the consistency of these devices. In the near future we will offer swappable options for even more curve control of your Microtron. Another feature is standard CV input to accept an expression pedal such as the Dunlop DVP4 without modification! Furthermore, you can send envelope control voltage to other units such as the Phasor III and Bi-Phase pedals. The Microtron IV will be available on 11/25 at 11am PST.

Also on this new platform we have been developing the new Bi-Phase II, the modern, streamlined version of the historic BiPhase.  About a quarter of the size of the original units, the BP2 will also employ the MU Opto-Mod, technology for better calibration, tighter tolerance and swappable character control. New features like 4/6 stage and CV OUT will open up even more possibilities. The unit is more pedalboard friendly as it routes the signal from right to left and can run off 9V DC power. We are pretty excited for this one and we know you guys are too.

Next up is the Boostron II. This amazingly transparent gain box just makes the world a better place. Based upon the same power section as the Microtron and Octavider, the Boostron II will have a choice of 3 classic preamp boost circuits. The Blaster is a JFET-based boost circuit from the legendary Stratoblaster. The Ranger is the Transistor-based boost circuit of the Dan Armstrong Red Ranger manufactured by Musitronics MU-TRON. Finally, the MU is something that kind of existed before: The sound of your guitar running through a Vintage Mu-Tron in bypass mode. Since they were not true bypass, the gain stage would bleed through the effect and do magical things to your subsequent pedals and amplifier. On the other footswitch there is a dedicated Dan Armstrong Orange Squeezer compressor with squeeze and level controls. Running at the higher voltage, this compressor is so amazingly quiet that you may just leave it on.

Last in line is the Octavider+. Octave and Fuzz make such a fine pair and since a lot of folks may not use the bass-only feature of the Octavider, we figured “what the heck.” There are so many different fuzz circuits, but for historical purposes and general usability, we decide to marry the MXR Distortion+ and the Dan Armstrong Blue Clipper.  After some tinkering, we came up with a hybrid diode/LED circuit running at the same high voltage as the Octavider. With a single fuzz knob and a dedicated footswitch, the effect may be controlled by the volume knob on the guitar and may be used independently of the Octave effect. Turn on the octave, blend in some Green Ringer, engage the fuzz……… KILLER analog fun.

Thank you for your continued support of MU-TRON!

First of all, we would like to say thank you to everyone who has supported us thus far this year. We are looking to use this as a forum to keep everyone up to date on what we have going on. Want to win a Microtron III? We are looking for a new t-shirt design. Enter our art contest and the best entry will win a Microtron III! You can see more details under art contest on our website. Currently, we have Octavider’s, Boostron’s, and a handful of sale scratch and dent Boostron’s available in our store. There is also some new merchandise including coffee mugs and tumblers.

We are working on a new batch of Microtron’s and are hoping to have those completed by the new year. In production our Phasor III is coming along nicely. These look like they should be completed in early January. Our new optical chip sounds amazing and we are very pleased with how the pedal sounds overall. The all analog Phasor III takes the legendary opts-circuitry of the vintage Phasor II and Bi-Phase pedals and packs them into a compact 9-volt enclosure akin to the Micro-Tron III and Octavider pedals. In addition to re-creating the creamy phase of the Phasor II, the Phasor III also offers a 4 stage mode with a fixed feedback to get the classic rock tones that work well with overdrive and distortion harmonics. Finally, there is a control voltage input that will allow for real-time control of Rate or Depth to give the musician utmost expression and “Leslie Speaker” type of sounds. The pedal also supports control voltage out so that 2 or more Phasor III pedals can be linked to offer Bi-Phase and Tri-Phase types of applications.

In other news we are ramping up for NAMM and hope to see many of you there at booth. Mike and Rand are both excited to be there and show you what we have been working on. The new Phasor III will be there for you to try. There are a lot of pedal ideas in the works and we are heading into next year with a lot on our plates. The new year will hold a lot of exciting things for us and we are glad to have you along for the ride.